This site uses cookies to help us provide quality services. Using our services, you consent to the use of cookies.
More info Agree 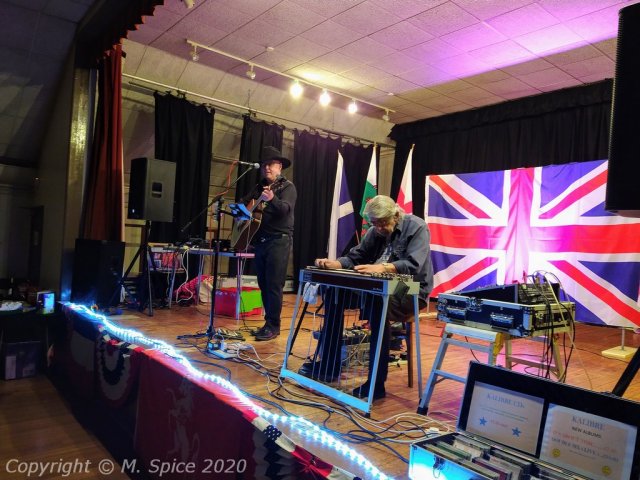 March 14.  Due to the Coronavirus this may have been our last event for several months. Understandably there were a lot of late cancellations, so in the circumstances there was still a reasonable attendance to see Kalibre and Mary thanked everyone present for their support.

Kalibre have a long association with the club, possibly longer than mine, and as usual there were faultless performances from Bobby Reid (vocals/guitar) and Bob Dixon (pedal steel/dobro). They achieved the seemingly impossible by taking our minds off the gloomy news at times, none more so than Bob Dixon’s superb rendition of ‘Misty’. Bobby predicted that his self-penned song ‘Too Long’ would fill the floor and so it proved with a full circle up for the Barn Dance. Kalibre also featured some songs from their two new CDs which are titled ‘It’s About Time’ and ‘Double Six (live)'.  Thanks again to Kalibre for a very entertaining evening.

I usually send a copy of my reports to Cross Country but they will not be publishing again “until such time as it is safe to do so”. Mary and her team sympathise with the country acts whose livelihood depends on entertaining us. We will miss seeing our regular supporters and friends for a while and hope that you all stay safe and well. Mike.

February 8. As usual in February this was a Valentines themed evening with the hall appropriately decorated and the ladies receiving a red rose on arrival. Also this evening was the club’s annual performance of the Trilogy when the club honours those who have given their lives in conflict and remembers loved ones and club friends who have passed away in the last 12 months, namely Gerald Brooks, John Nash and Eddy Farmer. In addition to many of our regulars the attendance was boosted by others attracted by the appearance of Rancher and it was pleasing to see the respect from everyone while the Trilogy was taking place.

A first this evening was the replacement of the usual tea light candles on the tables with bottle lights. These looked particularly effective when the hall lights were turned off as Rancher entertained us with another high quality performance. After 27 years of performing together it is no wonder that Steve Lovett and John Hallett are one of the UK’s most professional country music duos. Good vocals and live music from Steve on lead guitar and John’s skills with bass guitar, slap bass and acoustic guitar were enhanced by Steve’s self-made backing tracks. No surprise from this class act was the inclusion of the latest popular songs such as Close Enough to Walk, the requested Tennessee Whiskey and the final song, I Close my Eyes.

January 11.  The first act in the New Year was the Ray Peters Duo when Ray Peters (who I saw as a solo act only 7 days earlier at another Kent club) was joined by Ray Phillips, an accomplished steel guitarist who has played with numerous bands. The duo packed a lot of songs into each set with not much time spent chatting. It’s a long time since I’ve heard Fly Like A Bird which was well applauded although it seemed that the dancers had either forgotten it or never learnt it.  Something for everyone sums up the evening's entertainment which concluded with Ray Peters’ self-penned The Goodbye Song.

Ray Phillips appeared here in April 2019 with Ridgeway Country and they are back again this April.  As our regulars know, the club meets on the second Saturday of each month but exceptionally this will be on the third Saturday of the month (April 18) as the hall is not available to the club over the Easter weekend.

December 14. Before Texas Gun started this evening’s entertainment compère Danny announced that, sadly, John Nash, one of our regulars, had passed away since our last event and, as is customary at the Best of British CMC, he will be honoured with others we have lost this year at the annual performance of the Trilogy in February.

As in 2018 the entertainment for our Christmas event was provided by Texas Gun.  Last year George Payling Snr. and Jnr. appeared as a duo but this time they were joined by the accomplished musician Derek Thurlby.  Playing steel and lead guitar he added an extra dimension and I was particularly pleased because the steel guitar is one of my favourite instruments.  With the hall seasonably decorated, mulled wine and mince pies handed out on arrival, it didn’t take long for the band and their audience to get into the festive spirit.  The floor was crowded when a Christmas Medley gave an early opportunity for a partners Barn Dance and a singalong, which for some who did both was multi-tasking.

The second set started with a (mostly) Scottish medley with the two Georges appropriately wearing kilts. Responding to a request for a carol they sung Silent Night which attracted good audience participation and a full circle up for a waltz.  Of course there was plenty of good country music throughout and for me a welcome feature was some newer material that I don’t recall hearing from Texas Gun previously including Bonaparte’s Retreat. This excellent Christmas Show was brought to a fitting conclusion with a large circle for Best of Friends and Auld Lang Syne.

Congratulations to Jenny and Colin who held a draw for a doll and raised £300 for MacMillan Nurses.  Mary thanked everyone for their support during the year and those who generously donated some wonderful prizes towards a bumper raffle.

November 9. The Jeff Gallant Band made their first appearance here tonight and it was also the first time I’d seen them. Lead vocalist Jeff was still recovering from flu but that didn’t detract from his performance and he was well supported by Clive Grant (Bass guitar/vocals), Matty Baker (Drums/vocals) and Mark Dunn (pedal steel/lead guitar/vocals) - all talented musicians. A varied first set went very quickly with a highlight for me being Mark’s steel guitar solo - Steel Guitar Rag.

Later, I was equally impressed by some of Mark’s brilliant guitar playing. Clive featured with several lead vocals and what made the entire band stand out for me was the overall very full sound which filled the hall, as well as individual contributions.

They were also flexible enough to play several requests. Although they performed mainly traditional/older songs there was plenty for the dancers and it was good to see a full circle of partner dancers for the still often played Waltz Across Texas.

Overall it seemed that the band had enjoyed playing for us as much as we had enjoyed listening to them. Among the numerous complimentary remarks at the end of the evening several said it was the best band they had seen.

October 12. With both Jaynie and Greg in good form we were treated to a typically lively performance from Souls ‘n’ Stone who seem guaranteed to give almost everyone an enjoyable evening.
There was plenty of content for listeners and dancers with a good mix of newer and older songs but surely none older than the currently very popular Bonaparte’s Retreat which has a history dating back to at least the 1800s. Thanks to Jaynie and Greg for making the long journey south to entertain us.

Unfortunately, we learnt this evening that the Star and Garter CWC in Sidcup, ran by Chris, Steve and Parry, supporters of our club, has closed due to insufficient support.
This was despite providing a good programme in 2019 with some of the best country music acts available. Worrying times indeed.

On a brighter note, congratulations to Mick Spice, on completing his 12th year of managing the Kent Country website. Since it was created in September 2007 the site has provided free publicity for local Country Music Clubs and other Country Music
Events, including a comprehensive What’s On.

September 14. Unfortunately (if it is unfortunate to be relaxing on a sunny beach) I missed The Keeleys making their first appearance at the club so my report is compiled from notes supplied by Mary & Maggie.

The Keeleys are Bob (guitar & vocals) and his son Joe (guitar, mandolin and vocals). They impressed as accomplished entertainers combining good vocal and musical skills with the addition of plenty of friendly banter with their audience. Their content was an ideal mix of songs spanning numerous decades with something to please everyone. Reading that they had performed the old western song My Rifle, My Pony and Me reminded me of the scene where Dean Martin and Ricky Nelson sung this in the 1959 film Rio Bravo. Seven Spanish Angels was another old favourite and newer songs included Dirt On My Boots sung by Joe who has a new single called No Good Living which can be heard on Joekeeleymusic.com’.

Those who attended had a good evening deserving of a higher attendance.

They were privileged to see Bob Keeley fresh from winning the CCN Solo Act of the Year 2019 award. Congratulations to Bob who has now won a CCN award for four successive years.

August 10. It is a shame that Les Evans is still too unwell to perform with Glyn Long as one half of the Longshot duo but Glenn Rogers proved to be an excellent replacement. Having two lead vocalists gave a different dimension to the act with contrasting vocal styles and I particularly liked the frequent variation between older and newer country music. For example, Glenn singing Loving You Makes Me A Better Man, was followed by Glyn with Day of the Dead. Listeners and dancers showed their appreciation with good applause throughout the evening. Just how up to date Longshot are was emphasised when DJ Dave joked about them performing most of the club’s dance list, an exception, which Dave played, was a request for Dig Deep.

Unusually, there were more partner dancers than line dancers up for Gypsy Queen. Most of the partner dancers were from Danny & Barbara’s It Takes 2 western partner dance class, details available on the Best of British CMC website or you can call Danny/Barbara on 01795 475453.